Rum started off with Graded 3-5 Jumping which was quite a naggy course but really huge course. He ran really nicely and just had a pole down when I hesitated as to which way we had to go next!! Then Novice Olympia and we were clear, I quick released his contacts though his dogwalk was a bit creepy and he had a wide turn before the dogwalk but I was really pleased and we ended up 10th.

Cas only had one run which was helter skelter and she was clear though had a twizzle out of the tunnel so I don't know where she was placed.

Ember ran past the tunnel in Graded 4-7 Jumping, shame as she was running nicely but it was my fault by moving on too soon. Then Combined 4-7 Agility and I did a very daring recall and it paid off really well, she missed her weave entry as I didn't shape her into her turn enough, then she backjumped as I should have left her carrying on the way she was going but I didn't!!
Journey home was a nightmare, several roads closed due to fallen trees, a few near misses!! Video footage of all runs and also a couple from Waldridge:

SATURDAY- Rum ran Novice Olympia first, had a lovely run but judge marked his up contact, boo hoo(see vid) - I hate up contacts lol!! Then his graded agility he picked up 5F again and am not sure why, shame he would have won the class by 2 seconds, but then saying that I don't want him in Grade 5 yet. In his first jumping run he must have had about 5 jumps down, only thing I can thing is the ring was quite slippy.
SUNDAY - First run was combined 3-5 Agility and he was naughty and flew his see-saw so I put him back over it and left the ring. Then Combined 3-5 Jumping which he ran lovely but for some reason came out of the 4th weave?!? Graded Jumping and he had a pole down - otherwise again lovely and a nice wait too. Finally Graded Agility and he blatantly jumped his A-Frame contact so I put him back over and left the ring.

SATURDAY - Cas had a lovely clear in Combined 6-7 Jumping but was unplaced, unfortunately had a pole down in the Graded 6-7 Jumping. She had nice runs in both agility classes just missing her A-Frame contact in both.
SUNDAY - Again a nice clear in Combined 6-7 Jumping and a pole down in the Graded Jumping grrr. In Graded Agility I needed a wait so really reinforced it and got one but she knocked the first pole, typical! She then went on to run by tyre as I didn't tell her enough but otherwise got round a REALLY tough course and got all her contacts. Final agility and I got a 4 jump recall out of her which is generally unheard of, but again missed her A-Frame contact.

SATURDAY - Oh my god this little sheltie is on form!! She knocked the first pole in Graded Jumping but otherwise had a nice if a little messy round. Then we ran Combined 1-7 Jumping and she felt lovely, fab clear and we ended up 1st! Finally Graded Agility and she ran by the A-Frame but otherwise a lovely round and stunning contacts, 5 jump recall and again came 1st! 2 wins in a day, I have never had 2 wins in a year with her!
SUNDAY - I think I may have dreamt this weekend! Started with Graded Agility and she ran by the see-saw and self released her A-frame, so I put her back on her contact (don't want to lose them!). Then a stunning clear in Graded Jumping, another 1st. Finally a tough (for Ember) Combined 1-7 Jumping, really straight, fast weave entry - well amazingly we had a stonking clear and another 1st! 4 wins at one show, 6 wins in 2 months, not bad going :-)))

Rum was totally loopy. On Saturday I put him back on his a-frame as he early released after having made a right hash of the start of the Novice Olympia. His other agility run was really nice but I didn't send him out enough and he ran in past a jump. On Sunday, his grade 4 jumping he was naughty and missed his weave entry despite it being jump, weaves!!! Then combined 3-5 jumping run he had a nice clear with one messy bit and came 20th. Finally Grade 4 Agility and he decided to ignore me and fly up the A-frame, contacts were nice but weave entry none existent again!!

First time back running Ember and she felt lovely, we only had two classes on Sunday. Lovely long wait and contacts in the agility but I pulled her off the tunnel entry, another lovely long wait in jumping and I moved too soon pulling her off a jump, then didn't go far enough on weaves, see vid vv:

Rum started off with Grade 4 Jumping and he went clear, yay finally! I made sure I hung back for his weaves and he had a lovely round, almost refused the tyre as was turning back to see where I was after the flat tunnel (need to make sure I am encouraging him through it) and also had a wide turn before the tunnel as I didn't call him early enough, anyway he ended up 5th out of about 120 dogs so was pleased with that. Then Combined 3-5 Jumping and another clear (see video) was so pleased, was a bit messy after jump two, had a twizzle out of the tunnel (I took a risk staying behind it) and almost ran by the long jump as he landed so long but he was so good and quickly took it as I shouted right lol! then Grade 4 Agility which was a horrendous course and we got Eliminated before obstacle 3, I carried on for a bit to do the A-frame and Dogwalk but I really didn't want to put both of us through the rest of the course as it was far too difficult for a young dog.

Cas started with Grade 6 Agility and missed her A-frame, again she wouldn't send to the tunnel. Combined 6-7 Agility she missed the A-frame again and did the rest nice but at two points just would not send on again. Finally Grade 6 Jumping and I fell over!

And the excellent news is Char had a fantastic round with Ember in the Combined 4-5 Jumping and won it by 2 seconds so that now makes her Grade 6 - well done!!

Rum and I didn't do very well this weekend, his contacts were stunning and his turns were lovely but his weaves were awful!! He missed the entry twice, skipped the second pole and came out the last but one. He was really rocketing round this weekend and I think he just could not stop himself to steady before the weaves - aaarrrgh! We've not had this problem before he has always been perfect and trouble is with training indoors he isn't getting the same speed up that he does when he is outdoors.

Cas I am a little worried about, I think she may be starting to go deaf as the last couple of weeks I have lost her on a walk and she hasn't come back - have had to jump around like a loony to get her back! Then at home she keeps missing the last weave when I am away from her which she has never done. Her contacts weren't too bad if I was up there with her. She had a clear and 10th in Grade 6 Jumping with a couple of wide turns. Then on Sunday she would not send on in her jumping classes which is VERY unlike her which makes me think there is something going on. A 4 jump blast to the end and she pulled off the last to look at me as if to say what next despite me going GO GO GO, so I need to book her in for a hearing test.

Some of our runs from the weekend, lets hope we get it together next show!

Sweep - Ferrous A Touch of Danger 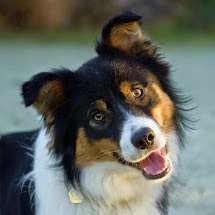 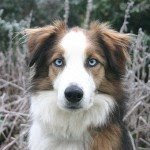 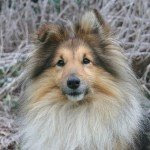 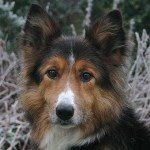 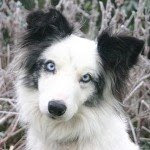